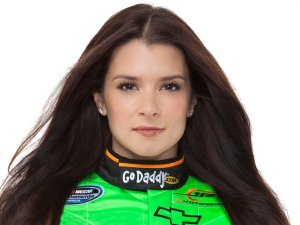 So why did GoDaddy really decide to end their sponsorship with NASCAR superstar, Danica Patrick? In being fully transparent, I am a huge Danica Patrick fan. So maybe I am going postal because I am a huge fan of hers. I was shell shocked when I heard the disappointing news that GoDaddy was dumping my girl, Danica Patrick. I call her my girl, in my noggin, she embodies the perfect female. Danica is what every female should aspire to be. GoDaddy said in a released statement something to the fact that they had hired a consultant to find out the best use of their marketing dollars, and it was in the best interest of the company, not to continue the main sponsorship of Danica’s #10 NASCAR Sprint Cup racing team. Danica put GoDaddy on the map with some of her great TV commercials. Here is just one of them:

OK, so they are still sponsoring James Hinchcliffe, who is currently competing in the IndyCar series. James Who? I know, right? Also, have you ever watched the Indy races on TV? The stands are usually empty. No one cares about Indy Car racing…. and sorry James, no one knows who the hell you are, even if the rest of the drivers call you Mayor. Most likely the bean counter that came in and told GoDaddy to dump Danica’s sponsorship, (which can be as high as $12 million a year) isn’t any of the following: 1. A NASCAR fan 2. a Person who totally understands the low visibility of the Indy Racing League (outside of the Indy 500) 3. A heterosexual male Danica is the best thing to happen to NASCAR since the implementation of the “Have at it Boys” rule, allowing the drivers to be more aggressive on the track. I think Danica’s appeal to all sexes, of all ages, is what also sets her apart from any other athlete in sports. I jokingly said that the GoDaddy bean counter must not be a heterosexual male, because honestly, what straight guy doesn’t find Danica drop-dead gorgeous? Danica has an easy-going personality unless she is cut off while driving on a superspeedway, and then she gets a bit of a potty mouth.

But I am sure she has a legion of fans of all persuasions (straight, gay, bi, trans, etc., etc.)  and of all sexes (male, female, etc.) just because she is a wonderful human being. Danica is hot. She is also a worldwide role model for young girls and boys. Many of those girls had the opportunity to see Danica race only because of Go Daddy. Go Daddy also sponsored her in Indy Racing, where she did have a win. Now that Go Daddy has pulled the sponsorship on Danica, there is the possibility that she might not find a new sponsor and be unable to race. I get that a NASCAR sponsor pays huge money and they are looking for wins. But also, you must remember, not all NASCAR drivers are created equally. Danica’s popularity supersedes her performance on the track. She currently holds almost every record, from a female racer, since they have been keeping records. Danica was just voted as most popular driver for Saturday’s All-Star Race. Go, Danica. I am not going to sit back in my easy chair sipping Diet Coke (Yes, I support the Coke Racing Family) and eating chili cheese fries and just let my girl Danica get booted out of racing. No, I am fighting back. I have started a Change.Org petition to get GoDaddy to reinstate their sponsorship for NASCAR driver, Danica Patrick. Please Sign the Petition:   Here

Be Creative. Create You OWN Life!